When it comes to trails, Downieville has a reputation for being raw, rugged, remote and rowdy. And considering Downieville is situated in the bottom of the North Yuba River canyon with mountains towering 4,000 vertical feet directly above it, the trails are also incredibly steep. Unless you are a fitness monster or a glutton for punishment, riding up into the mountains straight out of Downieville isn't an appetizing prospect, which is why the Yuba Expeditions shuttle has been so popular over the years. Hitch a shuttle to the top, ride back down, celebrate by the river with Good People; it's a recipe that's made Downieville famous.

But in this new world we find ourselves living, for the safety of our Downieville community members, the Sierra Buttes Trail Stewardship (SBTS) decided to suspend all Yuba Expeditions shuttle activity for the 2020 season. SBTS felt it was the right thing to do for the town to prevent the spread of COVID-19, because sitting in a van packed with people from all over the country isn't a great preventive measure. Folks coming to Downieville now have to either find another permitted shuttle service or self-shuttle. But amidst this health crisis, a third option has come to the forefront: the e-bike.

In August, SBTS hosted a couple days of riding from The Lure in Downieville, inviting SBTS partners from Santa Cruz Bicycles, Shimano, Fox Shox and the U.S. Forest Service. Yuba Expeditions made their demo fleet of Santa Cruz Heckler electric assist mountain bikes available to us, and we did two big days of riding too physically demanding for most humans on traditional mountain bikes. The Santa Cruz Heckler is considered a “Class 1” e-bike, meaning it has a battery and motor that assists in pedaling, but does not have a throttle and cuts assist at 20 mph. The bike will not provide assistance unless the rider is pedaling.

We were also fortunate to have Matt Hebberd of Rim Tours in Moab, Utah join us on the rides. Not only is Matt one of the founding fathers of mountain biking, growing up in Marin County in the 1970s, but he also co-owns Rim Tours, founded in 1990 as one of the original and longest-running mountain bike tour companies in the United States. In addition to being one heck of a capable rider, Matt is also an amazing trail chef, preparing evening meals from his built Ford F250 Rim Tours expedition rig used for backcountry tour support. 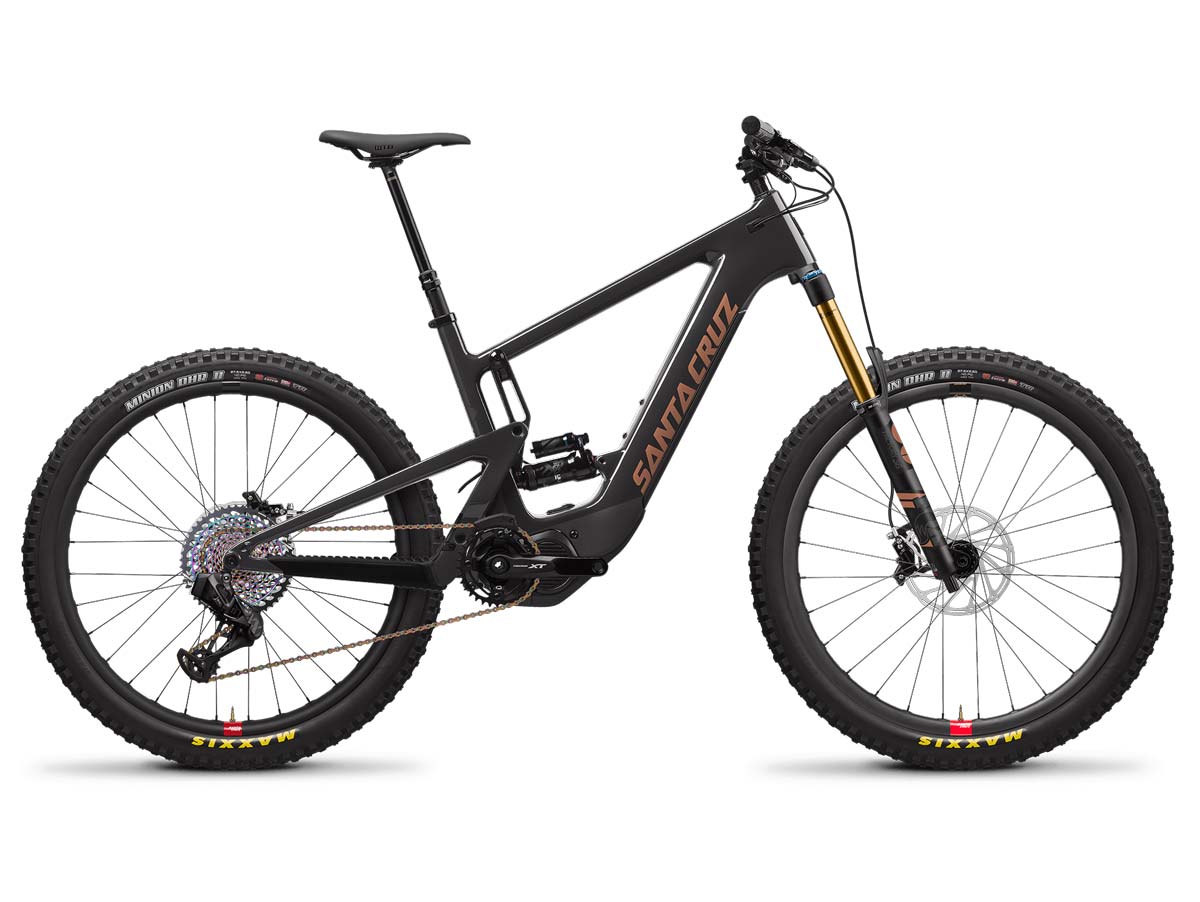 Having Matt along for the ride is helping us understand the future prospects of offering guided e-bike rides with a support crew, and what will be needed to logistically pull off such a feat. Speaking of support, SBTS kindred spirit Marc Cosby, aka “Uncle Coz”, met us each day halfway through the ride, providing lunch and a fresh e-bike battery so riders could extend the fun.

The first day a group of riders pedaled out of Downieville on North Yuba trail, through Goodyears Bar to Rocky Rest campground where Uncle Coz met us with lunch and a battery resupply. The goal was to evaluate the recent trail restoration work SBTS completed on North Yuba, repairing numerous landslides that shut the trail down for years, as well as identifying trail work that still needs to be done. By taking partners on the trail, they can see firsthand what work remains; work that partners might be able to financially support to keep the trail open and passable for the public.

“North Yuba trail is a perfect example of an ideal e-bike trail,” said Greg Williams, SBTS Executive Director. “This is a trail that would physically crush most mountain bikers because of its constant gains and losses of elevation, which is why the trail barely ever gets ridden. But on an e-bike, a group of 10 riders of varying skills and fitness levels can all enjoy it together.”

After a cool down dip in the North Yuba River, the crew climbed Fiddle Creek trail, with commanding views of the North Yuba River and the Sierra Buttes, finishing with a brake burning descent down Halls Ranch trail, returning to Downieville with an easy pedal along Highway 49. 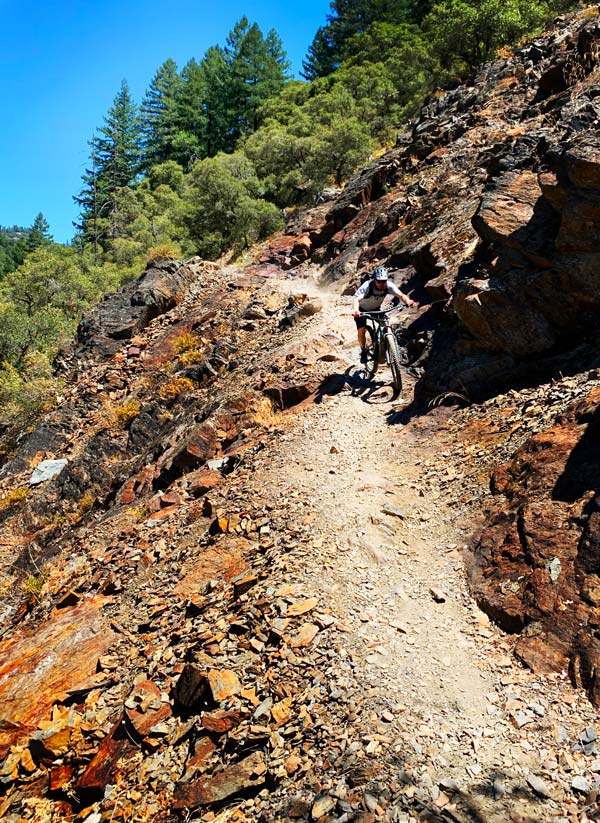 Day two took the crew into the high country, leaving Downieville up Sailor Ravine and Heliport trails, then over to Red Ant OHV road, connecting into Saddleback Road, then all the way up to Chimney Rock trail where the crew met Uncle Coz for lunch and a battery resupply. Navigating across the volcanic slopes of Chimney Rock is iconic with commanding 360 degree views, incredible rock formations, towering cliff walls and knife edge ridge riding; it's a trail that takes peoples' breath away with its beauty and steep climbs, especially on a traditional mountain bike.

Most folks dedicated enough to climb from Downieville to the top of Chimney Rock on a mountain bike face at least three hours of climbing more than 4,000 vertical feet. It's a ride that is usually only done once a year, or sometimes only once. But with the electric assist of an e-bike, Chimney Rock can be enjoyed multiple times in a season, finishing with the huge reward of riding Empire Creek trail, Downieville's original downhill trail that Greg Williams first guided mountain bikers on back in the late 1980s.

“This birth of e-bikes reminds me of the early days of mountain biking,” said Williams. “We are seeing a whole new era of riding possibilities that weren't previously realistic. And thanks to the OHV-legal status of Downieville trails, there are no conflicts riding e-bikes here.” 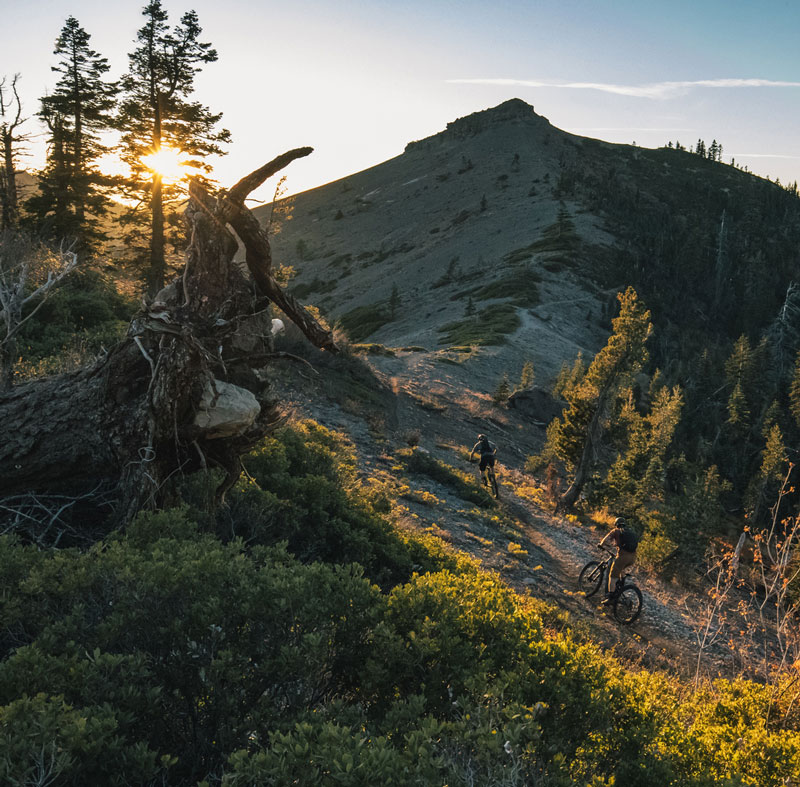 The capability of e-bikes will enable more folks to enjoy a wider range of trails, dispersing trail usage more evenly and taking stress off the main Downieville trails. E-bikes will also reduce the demand for shuttles, enabling folks to pedal right from Downieville into the high country, saving fuel, wear and tear on vehicles and roads. And having partners like the Tahoe National Forest in attendance helps land managers understand the positive attributes of e-bikes, the potential impacts and how they fit in with other recreational uses.

Want to have an entirely new and exciting Downieville riding experience? Yuba Expeditions is currently demoing Santa Cruz Heckler e-bikes, featuring a full size run as well as extra batteries that can be rented for those long rides like Chimney Rock. But riding an e-bike is most fun with company, so bring a few friends and let your legs be the shuttle for a weekend. 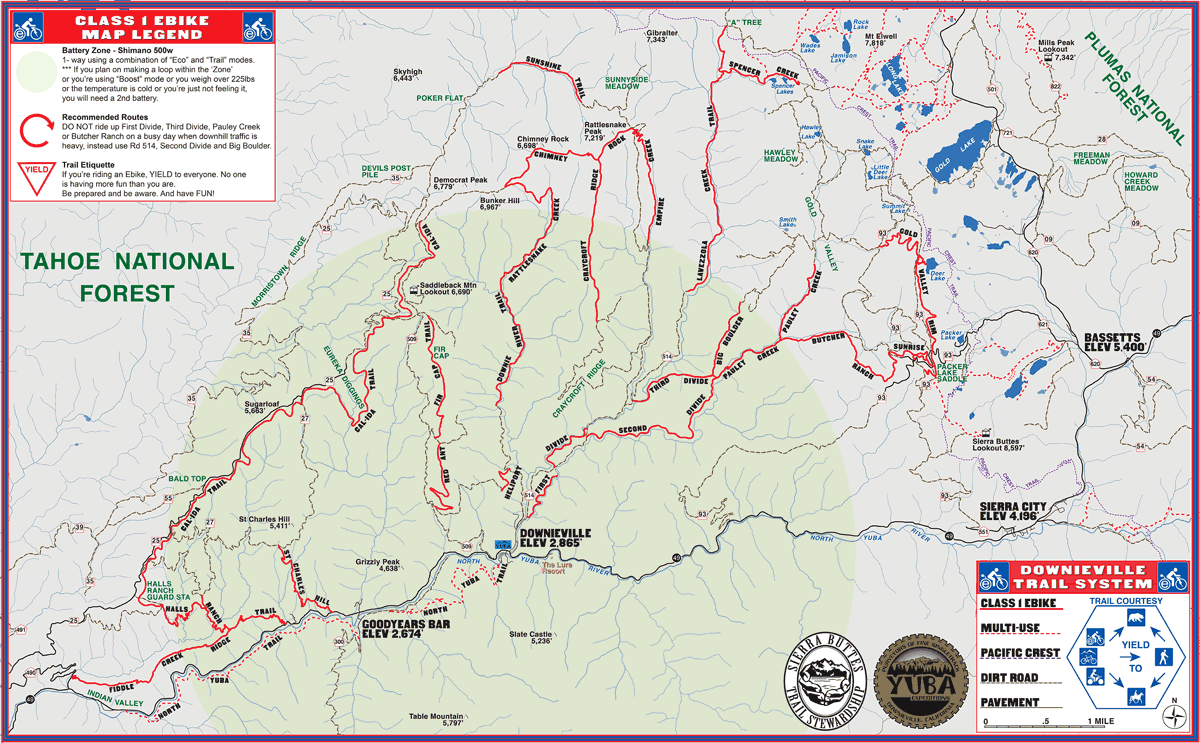